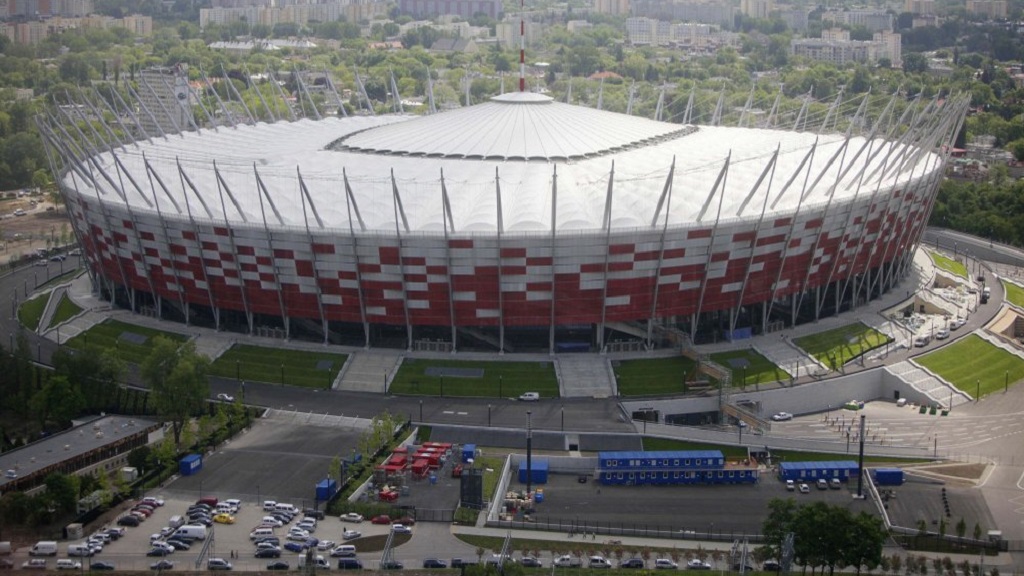 FILE - This Friday, May 18, 2012 file photo aerial view, made from an hot air balloon, shows the National Stadium, in Warsaw, Poland. Poland’s government is transforming the National Stadium in Warsaw into a field hospital to handle the surging number of patients infecting with the coronavirus. (AP Photo/Czarek Sokolowski, File)

Poland's government is transforming the National Stadium in Warsaw into a field hospital to handle the surging number of people infected with the coronavirus.

Government spokesman Piotr Müller said Monday that the stadium will have room for 500 patients and will be equipped with oxygen therapy for those who need it.

"We can see that the number of cases is growing so fast that we need to secure places for hospitalization for those who need it," Müller said, speaking on TVP Info, the state TV's all-news channel.

Also Monday, Jaroslaw Kaczynski, the leader of the conservative ruling party and deputy prime minister, went into voluntary quarantine after having contact with an infected person. He was showing no symptoms and working from home, the party spokesman said.

It was unclear how the government would manage to staff the hospital given widespread reports of shortages of doctors and other medical officials across the country.

The stadium, with a seating capacity of over 58,500, was constructed to host matches for the Euro 2012 football championship, which Poland co-hosted with Ukraine.

Poland experienced very low rates of infection in the spring compared with western European countries but is now witnessing an exponential surge of coronavirus infections.

On Monday the Health Ministry recorded 7,482 new coronavirus infections over the previous day and 41 deaths. Since the start of the pandemic the nation of 38 million has recorded 183,248 cases and 3,614 deaths. However, the true rate of infection is likely higher.

In the past day, 36,000 COVID-19 tests were carried out, meaning that nearly 21 percent of all tests came back positive.

Health Minister Adam Niedzielski warned Monday that Poland could have 15,000 to 20,000 new cases daily if infection rates keep increasing at their current pace. He said his ministry is preparing for that scenario.