France suspends fuel tax, but protesters vow to fight on 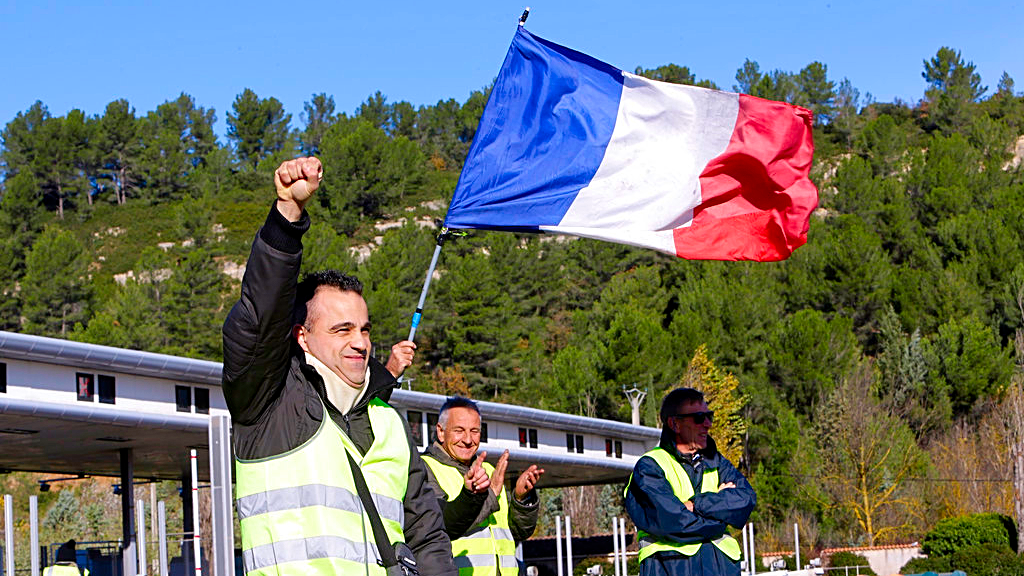 A demonstrators wearing a yellow vest clenches his fist as protesters open the toll gates on a motorway near Aix-en-Provence, southeastern France, Tuesday, Dec. 4, 2018. French Prime Minister Edouard Philippe announced a suspension of fuel tax hikes Tuesday, a major U-turn in an effort to appease a protest movement that has radicalized and plunged Paris into chaos last weekend. (AP Photo/Claude Paris)

The French government's decision to suspend fuel tax and utility hikes Tuesday did little to appease protesters, who called the move a "first step" and vowed to fight on after large-scale rioting in Paris last weekend.

In a major U-turn for the government, Prime Minister Edouard Philippe announced in a live televised address that the planned increases, which were set to be introduced in January, would be postponed until summer.

The backpedalling by President Emmanuel Macron's government appeared designed to calm the nation, coming three days after the worst unrest on the streets of Paris in decades.

"No tax is worth putting the nation's unity in danger," Philippe said, just three weeks after insisting that the government wouldn't change course in its determination to wean French consumers off polluting fossil fuels.

But demonstrations continued around the country Tuesday.

Protesters wearing their signature fluorescent yellow vests kept blocking several fuel depots and, on a highway near the southern city of Aubagne, protesters took over a toll booth to let vehicles pass for free. They put up a sign by the side of the road reading "Macron dictator."

"It's a first step, but we will not settle for a crumb," said Benjamin Cauchy, a protest leader.

In the nearby port city of Marseille, students clashed with police outside a high school. Student protests blocked or otherwise disrupted about 100 high schools around the country blocked or otherwise disrupted by student protests Tuesday, according to the French Education Ministry. Many of the demonstrations were over a new university application system.

More protests were expected this weekend in Paris.

Last weekend, more than 130 people were injured and 412 arrested in the French capital. Shops were looted and cars torched in plush neighbourhoods around the famed Champs-Elysees Avenue.

The Arc de Triomphe, which is home to the Tomb of the Unknown Soldier and was visited by world leaders last month to mark the centenary of the end of World War I, was sprayed with graffiti and vandalized.

"This violence must end," Philippe said.

Philippe held crisis talks with representatives of major political parties on Monday, and met with Macron, who canceled a two-day trip to Serbia amid the most serious challenge to his presidency since his election in May 2017.

On Tuesday, Philippe announced a freeze in electricity and natural gas prices until May 2019, and warned protesters against more disruptions.

"If another day of protests takes place on Saturday, it should be authorized and should take place in calm," he said. "The interior minister will use all means to ensure order is respected."

A soccer match between Paris Saint-Germain and Montpellier, scheduled for Saturday in Paris, was postponed after police said they couldn't guarantee security there and at protests simultaneously.

The protests began last month with motorists upset over the fuel tax hike, but have grown to encompass a range of complaints, with protesters claiming that Macron's government doesn't care about the problems of ordinary people.

In all, four people have been killed and hundreds injured in clashes or accidents stemming from the protests.

Political opponents of the government called Philippe's announcement Tuesday too little, too late.

"This decision should have been taken from the start, as soon as the conflict emerged," said prominent Socialist figure Segolene Royal, a former candidate for president, adding: "The more you let a conflict fester, the more you eventually have to concede."

Far-right leader Marine Le Pen tweeted that the delay in price rises was "obviously not up to the expectations of the French people struggling with precariousness," and noted sarcastically that it is "surely a coincidence" that the price hikes will now come into effect a few days after EU elections.

Get the latest local and international news straight to your mobile phone for free:

French premier to meet with protesters amid anger over taxes