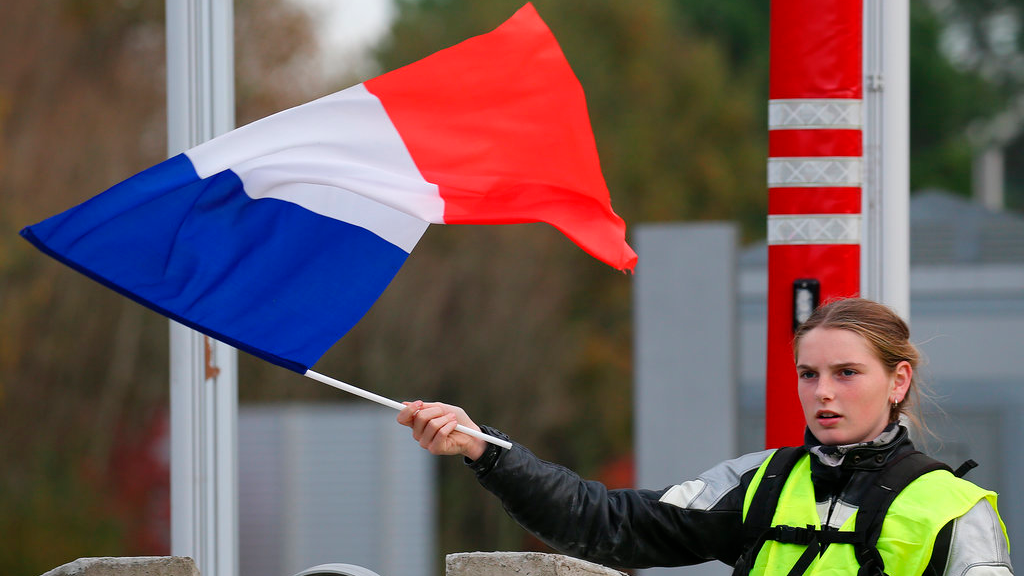 A demonstrator holds a french flag at the toll gates on a motorway at Biarritz southwestern France, Wednesday, Dec. 5, 2018.(AP Photo/Bob Edme)

Authorities across France braced Thursday for the possibility of more riots and violence at anti-government protests this weekend, holding emergency meetings and deploying tens of thousands of police and security forces. Museums, theaters, and shops in Paris announced they would close Saturday as a precaution — including the city's famed Eiffel Tower.

Police unions and city authorities met to strategise on how to handle the weekend protests, which are coming even though President Emmanuel Macron surrendered Wednesday night and cancelled a fuel tax hike that had unleashed weeks of unrest.

On the other side of France's volatile social debate, disparate groups of protesters did the same thing, sharing their weekend plans on social networks and chat groups.

Prime Minister Edouard Philippe told senators Thursday that the government will deploy "exceptional" security measures for the protests in Paris and elsewhere, with additional new forces on top of the 65,000 security officers already in place.

Some "yellow vest" protesters, French union officials and prominent politicians across the political spectrum called for calm Thursday after the worst rioting in Paris in decades last weekend.

Macron agreed to abandon the fuel tax hike, part of his plans to combat global warming, but protesters' demands have now expanded to other issues hurting French workers, retirees, and students. And in a move questioned by both critics and supporters, the president himself has disappeared from public view.

The prime minister reiterated the government's plan to scrap a fuel tax rise planned by the previous government because of the "extreme tensions" France is facing.

The rioting in Paris has worried tourists, prompted the cancellation of four French league soccer matches this weekend around the country and damaged the local economy at the height of the holiday shopping season. Rampaging groups last weekend threw cobblestones through Paris storefronts and looted valuables in some of the city's richest neighborhoods.

The Eiffel Tower, along with more than a dozen museums, two theaters and other cultural sites in Paris, will be closed Saturday for security reasons. The Paris Opera has cancelled planned performances Saturday on its two Parisian sites.

Two music festivals in Paris have been postponed and the Arc de Triomphe remains closed since it was damaged in last weekend's protest, which left over 130 people injured.

Paris police have also urged shops in the city's high-end Champs-Elysees area to close Saturday as a precaution.

A small union representing police administrators called for a strike Saturday, which could further complicate security measures. Two police union officials told The Associated Press they are worried that radical troublemakers from both the far right and far left will hijack Saturday's protests.

Meanwhile, videos on social media of police beating protesters at a Burger King near the Champs-Elysees have stoked the protesters' anger. A police spokeswoman said Thursday that an investigation is underway into that incident and police are examining other videos circulating online for possible violations.

Macron, the central target of the protests, has been largely invisible all week. After winning election overwhelmingly last year, the 40-year-old pro-business centrist has sought to make France more competitive globally. But his efforts have alienated even some supporters with badly explained reforms like tax cuts for the rich to spur investment in France. Many protesters feel Macron has an elitist, out-of-touch attitude that ignores the country's high taxes and high unemployment.

They felt the increased fuel tax in particular favored wealthy city folk who use public transportation over poorer rural residents who must drive to work or school or shops.

Macron doesn't face re-election until 2022 and his party has a strong majority in parliament, but his political opponents are increasingly vocal and plan a no-confidence vote in the government next week.

Clement Rozey, manager of a motorcycle shop in western Paris, spent two days and nights cleaning up after watching helplessly last weekend as thugs smashed his shop windows and emptied his shelves. He has boarded up the store and is among those staying closed on Saturday.

"We're going to have a security company with security guards inside and outside the shop," Rozey told the AP. "Everything has been fenced off, several times."

Yet he remains sympathetic to the protest movement.

"Just like everybody, we're strangled (financially) after the 15th of the month," he said, referring to the day when many French workers are paid. The protesters "are defending a cause, they're following through and rightly so. We support them whole-heartedly."

But violent troublemakers who pillage and riot?

"That's something else," Rozey said.

France suspends fuel tax, but protesters vow to fight on