Watch: Australian girl finds giant snake next to her in bed 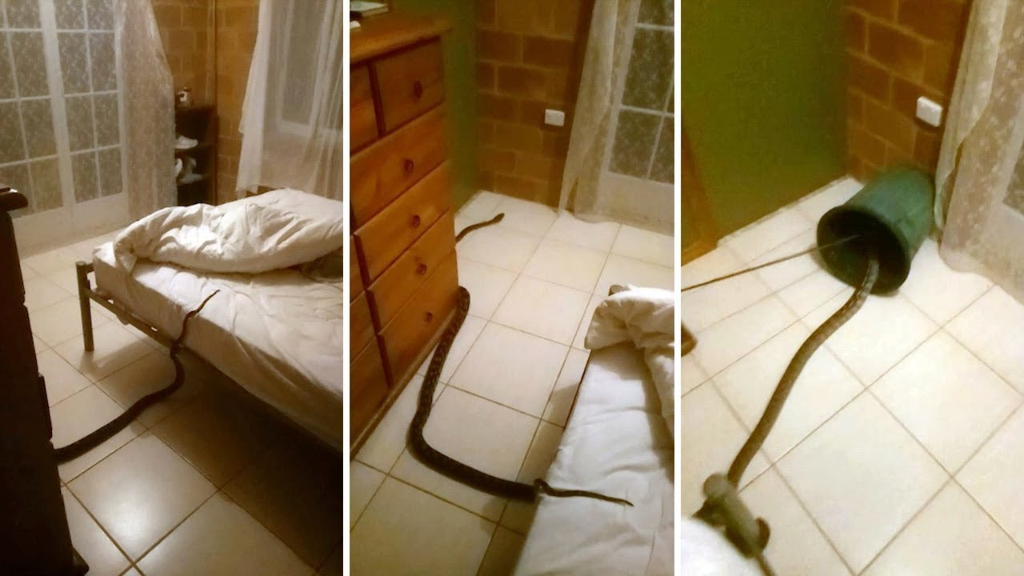 A fearless Aussie who woke up next to a giant 13ft snake in her bed believes the monstrous serpent was sizing her up for a meal – and she even caught and released it herself.

After feeling something ‘super cold’ press against her back during the night, Katjana Shoyer awoke to discover a horrifically huge 13ft [4m] snake slithering next to her in the sheets.

The 25-year-old from Port Douglas, Queensland, Australia, said her ‘heart stopped’ when she jumped up and saw the gigantic carpet python stretched out on her bed just inches from where she slept.

But while most would be quick to call a snake catcher to come to their rescue, Katjana took matters into her own hands by grabbing a nearby fishing spear and plying the serpent into an empty rubbish bin. With the help of her mum, the brave young woman simply popped a lid on the bin and hopped back into her bed to continue sleeping.

The chef added that the python was probably sizing her up for a meal due to the way it was stretched out next to her – but said her nearly 6ft frame might have been ‘too big for a snack’.

Katjana said: “I had only been asleep for about two hours when it all happened. I was sleeping on my side, and had rolled over onto my back, when I felt something cold underneath me.

“I went to see what it was and saw this snake stretched out next to me. I instantly got goosebumps and shivers up my spine. I couldn’t believe it. I jumped to the other side of the room in complete shock. I went to grab my mum from the other room. I just grabbed an empty bin and got a fishing spear, and it just started twirling around it.

“I managed to get it into the bin and put it outside with the lid on. It was so heavy, probably more than 20 kilogrammes [3st 2lbs]. After that I just went back to bed. It didn’t worry me too much. I just needed it to be out of my room, so I could get some sleep. The way it was stretched out I think it could have been sizing me up for a meal. But I’m nearly 6ft tall so it wouldn’t have been a light snack.”

The next morning, Katjana went down to nearby bushland to release the snake back into the wild.

Katjana added that it was not the first time she had seen pythons of that size around her town – and said many residents have had similar experiences, although never such a close encounter.

She added that her footage of the terrifying ordeal, which occurred in October this year, has ‘freaked out’ her friends and family online.

While non-venomous, pythons kill their prey by wrapping themselves around and crushing them to death.

She said: “We get a lot of different snakes up here, and they can get really big. I know this woman who actually found a python trying to wrap itself around her baby. So it’s actually pretty common.

“I think it may have got in by the back door or maybe the window. But I’m not really sure how long it had been in my room before I discovered it. But so far it hasn’t returned, so hopefully, I won’t be seeing it in my bed again.”

Watch: Python pulled out from car bumper in Thailand