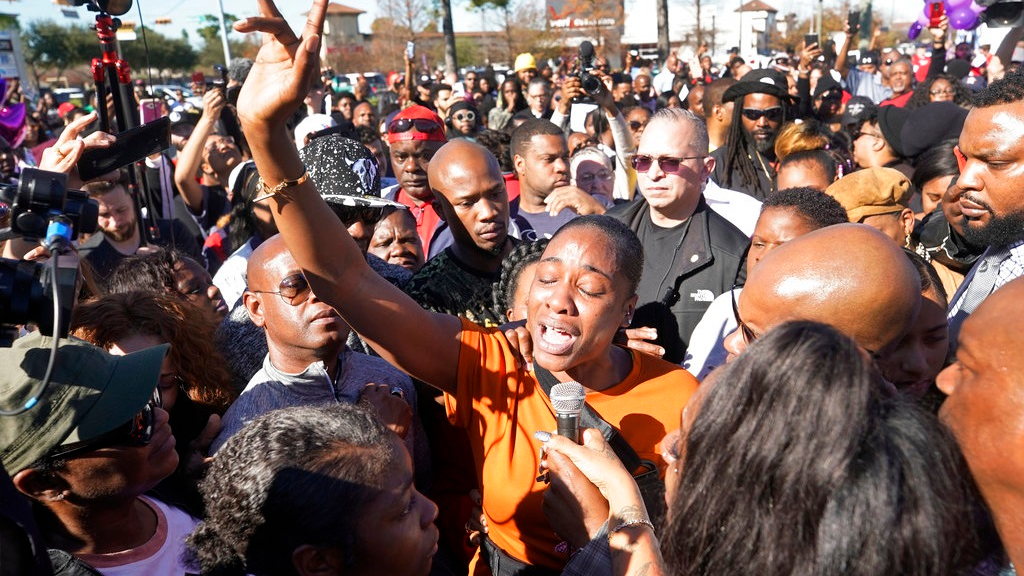 LaPorsha Washington, center, the mother of seven-year-old daughter Jazmine Barnes, who was killed on Sunday, speaks to the crowd during a community rally outside Walmart, Saturday, Jan. 5, 2019, in Houston. Jazmine was shot to death nearby on Sunday while riding in a car with her mother and three sisters. (Melissa Phillip/Houston Chronicle via AP)

Authorities in Texas have charged a 20-year-old man in the shooting death of a 7-year-old black girl who was killed while riding in a vehicle with her family.

The Harris County Sheriff's Office announced early Sunday that Eric Black Jr. was charged with capital murder in the death of Jazmine Barnes. Investigators identified Black as a suspect after receiving a tip, the office said in a statement.

"Investigators do not believe Jazmine's family was the intended target of the shooting," the statement said. "They were possibly shot as a result of mistaken identity."

Jazmine was fatally shot in Houston on Dec. 30 after authorities said a suspect pulled alongside the vehicle the girl was riding in and opened fire. Jazmine died at the scene, while her mother was shot in the arm. The shooting occurred as the family was heading to the store.

Following his arrest in east Harris County, the sheriff's office said Black admitted to taking part in the shooting. Officials also said investigators are looking into the possibility that others could be charged in the case.

Jazmine's mother, LaPorsha Washington, has said she believes the shooting was racially motivated. The alleged shooter was earlier described as a white man in a red truck, but the sheriff's office did not immediately identify Black's race.

Hundreds of people gathered at a rally Saturday afternoon for the girl near where the shooting happened. People held up balloons and stuffed animals, as well as signs that said "Justice for Jazmine."

A $100,000 reward was being offered for information leading to an arrest in Jazmine's case.