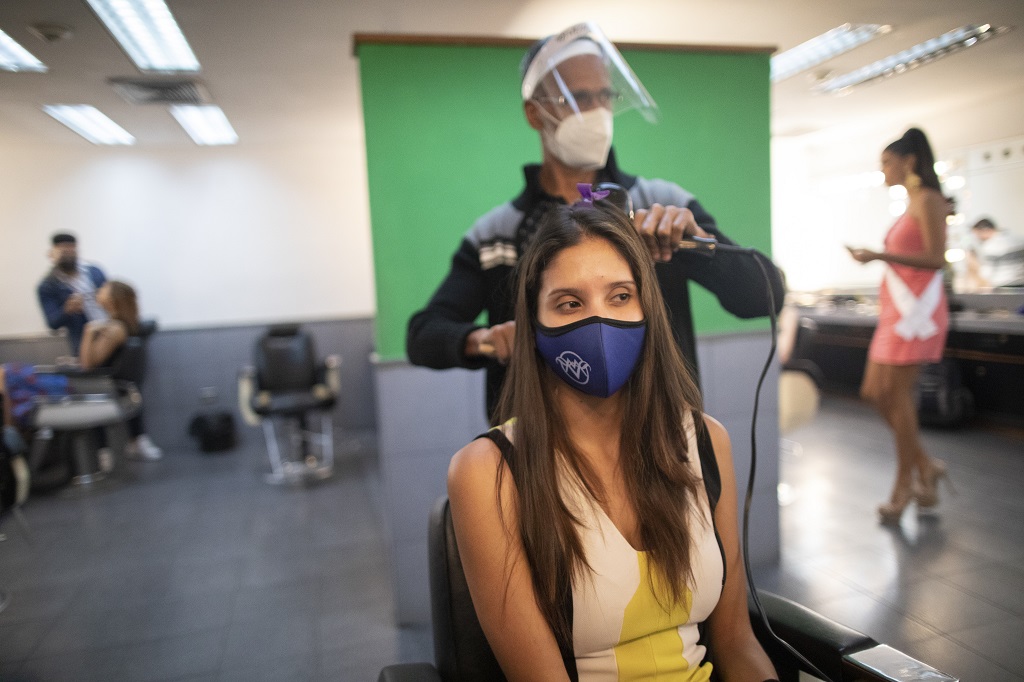 A beauty pageant contestant, wearing a protective face mask issued by the Miss Venezuela beauty pageant, watches as her hair is styled in a Venevision television station dressing room, in Caracas, Venezuela, Friday, September 18, 2020. Quarantine rules and social distancing has forced the contestants to train at home and online with limited access to the venue itself where strict measures are in place. The pageant is due to take place on September 24. (AP Photo/Ariana Cubillos)

For the first time in decades of Miss Venezuela competitions, the pageant powerhouse's so-called "most beautiful night" will not be live as organisers try to put on a compelling contest virtually amid a pandemic lockdown.

The storied beauty contest - Miss Venezuela has produced seven Miss Universe winners, six Miss Worlds and seven Miss Internationals - has endured corruption and sex scandals, as well as lawsuits, in recent years. But the novel coronavirus presents a challenge like no other, forcing the pageant to drop its musical productions and live audience yet still maintain the interest of its legion of loyal followers.

Each of the 22 competitors has been under strict confinement at home under quarantine requirements Venezuela imposed in mid-March, relying on distance learning through social media to master walking the runway, putting on makeup and performing, organisers say. The six-month training process to prepare the young women was done entirely online.

Organisers then recorded each participant individually, without protective facemasks, walking the runway and making other appearances on stage. The videos were edited to give viewers a sense that they all appeared together in a group.

The pre-recorded show will air Thursday night. The crowning of the new Miss Venezuela and the two finalists will take place the next day in another recorded program.

The event's general manager, Nina Sicilia, dismisses the notion that prerecording the contestants separately will take away the event's raw emotion. She said that during the show's opening runway walk each of the candidates was brought to tears and had to touch up her makeup.

"Necessity sharpens ingenuity," said Sicilia, who won Miss International in 1985. "We've had to reconfigure, adjust our resources, opportunities while always being conscious that this shouldn't change our focus."

The quarantine measures are aimed at avoiding infection for the 22 candidates, dozens of people who work around them and producers at the private channel Venevision. This is the 67th Miss Venezuela competition.

Sicilia took over the pageant's leadership two years ago together with María Gabriela Isler, Miss Universe 2013, and Jacqueline Aguilera, Miss World 1995. The organisation's executive committee underwent a dramatic change after the abrupt departure of Osmel Sousa, known as the Venezuelan beauty czar, who directed the contest for almost four decades.

"Making a program that you've been doing for so long and living with the adrenaline rush of being 'live' for three hours turned into two and a half months of individual recordings with the participants where biosafety standards have also become protagonists of the event," he said.

They've looked at the examples of others for ideas on how to put on a beauty pageant in the middle of a pandemic. They borrowed ideas from similar shows in Spain, the US and Italy, Di Salvatore said. Countries like Panama and Colombia have also moved ahead with beauty contests despite the pandemic.

The contestants between the ages of 18 and 26 come from diverse academic backgrounds — including doctors, lawyers, journalists, teachers and even a former Navy cadet.

Especially tricky for many was learning how to speak in public through a computer screen or a mobile phone, but Miss Venezuela's public speaking coach, Dave Capella, said he's confident each of the contestants has conquered this obstacle.

One challenge of the remote training program was helping the contestants overcome stage fright, Capella said. He first encouraged them to openly acknowledge their fears, and he pulled questions from videos of other international competitions to help them learn how to think on their feet.

Sicilia said that despite the difficulties brought by the pandemic, the show must go on.

"Our objective has always been to put on Miss Venezuela," she said.

NY Fashion Week 2020: Pared down, and virtually all virtual