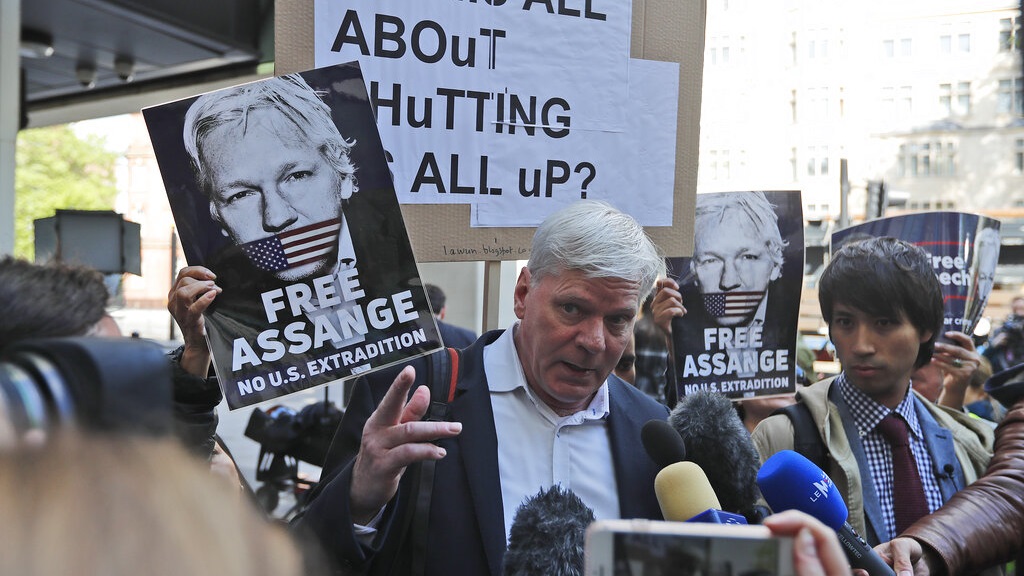 Kristinn Hrafnnson, Wikileaks editor in chief, addresses the media at the entrance to Westminster Magistrates Court in London, Thursday, May 2, 2019, where WikiLeaks founder Julian Assange is expected to appear by video link from prison. Assange is facing a court hearing over a U.S. request to extradite him for alleged computer hacking.(AP Photo/Frank Augstein)

WikiLeaks founder Julian Assange told a London court on Thursday that he would not agree to be extradited to the United States, where he is accused of conspiring to hack into a Pentagon computer.

Assange, appearing by video link from a London prison, said he would not "surrender myself for extradition for doing journalism that has won many awards and protected many people."

Judge Michael Snow said it would likely be "many months" before a full hearing was held on the substance of the U.S. extradition case. The judge set a procedural hearing for May 30, with a substantive hearing to follow on June 12.

The 47-year-old Australian was sentenced Wednesday to 50 weeks in prison in the U.K. for jumping bail in 2012 and holing up in the Ecuadorian Embassy in London. At the time, he was facing extradition to Sweden for questioning over rape and sexual assault allegations made by two women.

Assange says he sought asylum because he feared being sent to the U.S. to face charges related to WikiLeaks' publication of classified U.S. military documents.

Manning served several years in prison for leaking classified documents to WikiLeaks. She was jailed again in March after refusing to testify to a grand jury investigating the secret-spilling organization.

Ben Brandon, a lawyer representing the U.S. government, said in court Thursday that U.S. investigators had obtained details of chatroom communications between Manning and Assange in 2010. Brandon said the pair had "engaged in real time discussions regarding Chelsea Manning's dissemination of confidential records to Mr. Assange."

The U.S. charge against Assange carries a maximum five-year prison sentence, but he is worried the U.S. could add further, more serious allegations against him.

WikiLeaks editor-in-chief Kristinn Hrafnsson said Wednesday that the extradition battle was "a question of life and death" for Assange.

Some who had waited for two hours hoping to get in were bitterly disappointed when those seats were filled by journalists and lawyers. They shouted angrily at court staff and complained they were being discriminated against for backing Assange.

Assange was arrested last month in London after his relationship with his embassy hosts went sour and Ecuador revoked his political asylum.

WikiLeaks' Assange gets 50 weeks in prison for jumping bail

'I know nothing' - Trump changes his tune on WikiLeaks